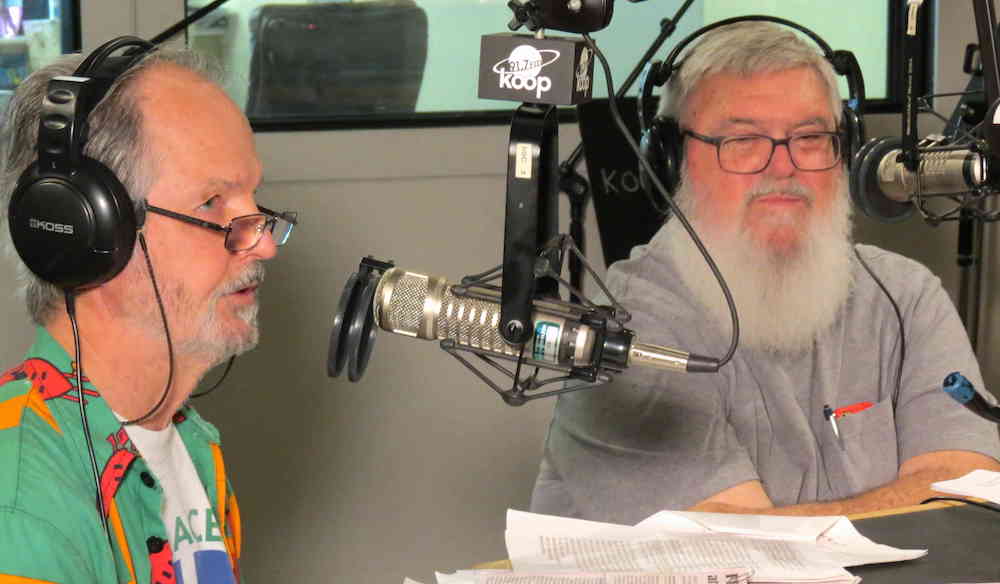 Thorne Dreyer's guests today, both Rag Blog and Rag Radio regulars, are Lamar W. Hankins and Alan Pogue. And we're going to look at guns and society from two different -- but not necessarily contradictory -- perspectives. Kind of micro and macro. Lamar W. Hankins, a former San Marcos, Texas, City Attorney, writes regularly for The Rag Blog on issues of life and death and the legal rights we should have between the two ultimate states. Hanks also blogs at Texas Freethought Journal and about death and dying at the Good Death Society Blog. Alan Pogue, now an acclaimed international documentary photographer who specializes in issues of social justice, was a chaplain and then a front-line medic in Vietnam with the 198th Light Infantry Brigade. He returned stateside a committed activist, heavily involved in the anti-war movement in Austin, working with SDS and Veterans for Peace - and as staff photographer for Austin's underground newspaper, The Rag. In his Rag Blog article, "Arguing about the Second Amendment is a waste of time," Lamar Hankins writes that "Reasonable gun regulation is completely compatible with the Supreme Court's understanding of the Second Amendment." He adds: Some historic research suggests that the purpose of the militias in colonial times was primarily two-fold: to capture runaway slaves and return them to their owners; and to kill or enslave the native inhabitants of this land, pushing those who survived into enclaves mostly west of the Mississippi River. But whatever the case may be, that matter is resolved for now. We should be focusing instead on gun safety/gun control regulation that is constitutional. About Hankin's article, Newsweek and Rag Blog columnist Steve Russell says this: Most of what Mr. Hankins says in this piece should be filed under, "It's About Damn Time Somebody Said That! On the other hand, In his "My General Theory of Relative Violence," published in The Rag Blog, Alan Pogue writes: This is the beginning development of my General Theory of Relative Violence, the economic philosophy of violence and then the specific cultural/historical development of violence in the U.S.. Here the genocide of native people and slavery is taken for granted by the children of the colonizers and slave owners. Not that most European Americans are consciously for slavery but that they do not understand that slavery is integral to the U.S. economic enterprise and is ongoing. This leaves no basis for critiquing our terrifically horrendous foreign policy. ...When domestic violence occurs few people are willing and able to say these are instances of a highly approved economic-political philosophy of violence.Rag Radio is produced in the studios of KOOP 91.7-FM, an all-volunteer, cooperatively-run, solar powered community radio station in Austin, Texas, in association with The Rag Blog and the New Journalism Project, a Texas 501(c)(3) nonprofit. It is streamed live on the Internet at KOOP.org and Radio Free America. The host and producer of Rag Radio, Thorne Dreyer, is a prominent Austin-based activist and writer who was a pioneer of the ’60s underground press movement. The show’s engineer and co-producer is Tracey Schulz and the staff photographer is Roger Baker; Suzy Shelor is Rag Radio associate; Alice Embree is guest host; and Glenn Smith is our political analyst. The syndicated show is broadcast (and streamed) live Fridays, 2-3 p.m. Central) on KOOP, and is later rebroadcast and streamed on WFTE-FM in Mt. Cobb and Scranton, PA., on Houston Pacifica's KPFT HD-3 90.1, by KKRN, 88.5-FM in Round Mountain, CA, and at WALHRadio.com in Wilmington, OH -- and as a featured podcast at Veterans Today. Learn more about Rag Radio here. Running time: 56:06 Contact: ragradio@koop.org.